From “Little Memories in Silhouettes and Other Lines”
Written by Phoebe Spaulding and gifted by Mrs. D. Baker

Now to the aged meeting-house close by,
With “gallery” behind the congregation.
My memory harks back almost to infancy
When, visitor, my child imagination
Was fired to epic pitch to see two girls
Still in short frocks, up in the “singers-seats”­
Edna-’n’-Grace Bliss, two village pearls
Upon one string; or, change the trope, two beats
Upon one key whose note the chord completes.
Before me sat two elfins clad in pink,
They were the children of the town store-keeper-
What was his name? …Hall …Holman …Howe, I think;
And I, whose loveless frocks were dark and meeker
Than any character Moses could claim,
Fell to them straight, and on mature reflection
Which lasted through the sermon and amen,
Decided pink must be angels’ selection.
I judge they were but ordinary fry,
But in my Hall of the Immortals they hang high.
In that quaint church there never was a wedding
That I heard of, but many a funeral-
From darling Mattie Ufford just a-budding
Into a sweeter bud, to several
Whose tree of life long since lost fruit as bloom,
And those whose sturdy plant withered at noon,
There preached for many years S.K.B. Perkins
Of Congregational relation;
And every other Sunday for their sins
His people heard the Methodist persuasion;
There on each other month’s beginning Sunday
Red-bearded Deacon Barber from the Hollow,
And Village Deacon Marston grey and kindly,
Passed the communion bread with wine to follow­
Until religious schism made the blot
That lasted years of days. For every spot,
Or church or state, has some of Main Street in it;
Yet none methinks so much as the poor cynic
Who sees but Main Street when he tries to limn it. 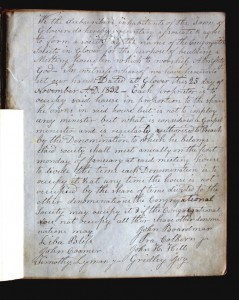 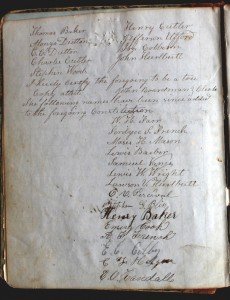 Minutes from the first organizational meeting of the church November 25, 1832